It's been piping hot over the past few weeks, but the hot weather hasn't kept the pilots from flying. We've been spinning, looping, recovering from unusual attitudes, and just plan dialing in those wheel landings over the first week of August. If you haven't seen the sky and earth swapping places in a while, or ever, lets set up some time to do just that. I can't stress enough how important it is to have seen and experienced the "out-of-the-box" sensations and views of the not-so-normal flight attitudes encountered during acro, spin, and unusual attitude training. Other than the plain fun of it, its utility is quickly realized if the event is ever unintentionally encountered during "normal" flight. Plus, as Sean D. Tucker says, "it sets you free" from fears and gives you a new confidence in your skills.

Ralph Boyd, finishing up his tailwheel endorsement in this most excellent landing at GVE. Ralph is moving on to some acro to become a safer pilot (and to have a wee bit of fun, too). Photo by Mike Colburn. 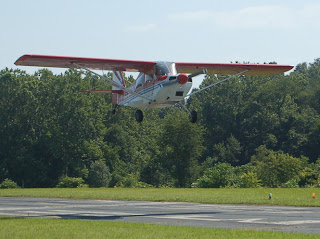 See you at the airport!
Posted by Mr. Stick and Rudder at 4:51 PM

Picture You in the Front Seat